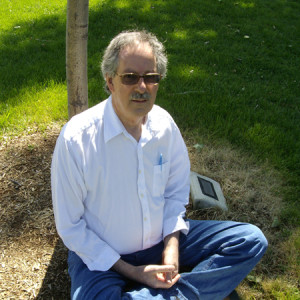 Before coming to Albuquerque, New Mexico, where I now reside with my wife and two sons, I lived in Montreal, Canada and published short stories and poetry in the Antigonish and Wascana Reviews. I traveled in Europe for six months and South America for three months, but it was while working on farms, ranches, and an open-pit copper mine in Canada that I heard a door into the future creak open.

In Albuquerque, I became friends with a man with ALS and in the early 1990’s, when I returned from the six-month “Human Development Program” at the Nyingma Institute, we launched a non-profit, Friends in Time, which still provides free services to people with MS and ALS.

My memoir, The Flying Caterpillar (ABQ Press, 2012), as well as being a travel log of my life to-date, gives an account of my two decades with Friends in Time and explores the teachings and encounters which have proved to be valuable for a lifetime.

In 2012 I also published Asleep at the Wheel of Time (ABQ Press), a SF novel about Whales, Aliens and humans. Both these books express my concern about the state of planet Earth in light of our accumulating indifference to the plight of our only home.

My new novel, Falling on the Bright Side, draws directly on my experience working with the disabled (For more than five years I’ve also been President and sometimes ED of Pathways Academy, a school for kids with Autism and other learning issues). Falling tells the story of people who have been shelved in nursing home warehouses, or have otherwise lost their livelihood and value to society, and the narrative arc explores how the human dimension continues to shine in these human beings.

In my own life I have discovered that people who are in the process of losing their identities, occupations, and old friends are able to help me recognize a deeper truth about the human predicaments we share. This is a human truth which I also find celebrated in Eastern spiritual teachings. Encountering the core of humanity in people whose familiar lives have dissolved, I seek to learn their secret while I still have time on my side.